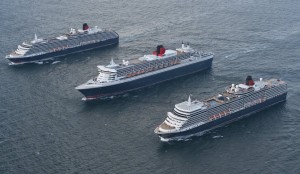 Here are 3 ships we have had the pleasure of looking after this season, excellent and friendly shorex staff on all three ships.

Cunard’s prized Queen cruise ships lined up side by side for a dramatic photo shoot as the fleet sailed from Lisbon to Southampton to mark flagship Queen Mary 2’s 10th anniversary.

The grand ocean liner was joined by sister ships Queen Elizabeth and Queen Victoria, as they sailed out of Lisbon ahead of HRH The Duke of Edinburgh’s visit to celebrate the milestone in Southampton .

Photographer, James Morgan, took to the skies in a helicopter to capture the iconic shots of the three ships sailing in formation.

Months of planning went into the photo shoot, including a logistical meeting with the captains and crew of the three ships to schedule down to the smallest detail just how the shoot would be accomplished.

“When you are dealing with the largest ocean liner in the world, you can’t sit in a helicopter asking if it can go left a bit or right a bit because it doesn’t work like that,” Morgan said.

It took the three Queens an hour to sail out of Lisbon to the site of the shoot, with all shipping in the area cleared to ensure safety for the technical manoeuvre.