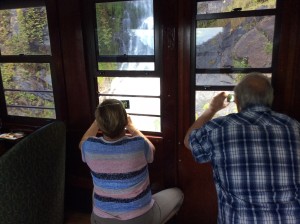 Desperate calls for a railway to the coast

The setting was the prolonged North Queensland wet season of 1882. Desperate tin miners on the Wild River near Herberton were unable to obtain supplies and were on the verge of famine. The boggy road leading inland from Port Douglas was proving impossible. As a result, the settlers at Herberton raised loud and angry voices and began agitation for a railway to the coast.

Coming general elections and increasing cold weather in the south saw visits to the north by leading politicians. All promising a railway. In March, 1882, the Minister for Works and Mines, Mr Macrossan announced the search for a route from the Atherton Tablelands to the coast. He commissioned Christie Palmerston, an expert bushman and a most colourful pioneering character, to find a suitable route.

In February 1882, both Port Douglas and Cairns formed Railway Leagues and engaged in a long and bitter fight for the right to the railway. Not long after, Geraldton, later named Innisfail, entered the competition boasting the sound virtues of Mourilyan Harbour.

During that year Palmerston marked several possible routes from the coast, inland along the Mossman River, the Barron Valley from Cairns and the Mulgrave Valley. In November 1882 Palmerston made the trip from Mourilyan to Herberton in 9 days and repeatedly came across the track which had been marked by an inspector named Douglas in May of that year. On arrival, Inspector Douglas had wired the Colonial Secretary: “Arrived Mourilyan 28th May. Fearful trip. No chance of road. 20 days without rations, living on roots principally. 19 days rain without intermission.”

In March 1884, a surveyor named Monk submitted reports from investigations carried out on all the routes marked by Christie Palmerston. This culminated in a decision that would shape the future of North Queensland. The Barron Valley gorge route was chosen. The storm of indignation which followed from Port Douglas and Geraldton was as enormous as the jubilant celebrations from the people in Cairns.

Information provided from the KSR website, photo supplied from one of our fantastic guides Michelle Jago